The plot of Blade Runner 2049 refers to a ‘black out’ that plunged the world into darkness for ten days. During this cataclysm many historical records, hard drives and important data that was not written down on paper was destroyed.

Blade Runner may be space-age fiction but the fragility of human records, especially those held in digital format, remains a huge concern for archivists.

The Cassini probe on its mission to explore Saturn and its moons. (credit: Wikipedia)

Staff at the UK’s National Archives recognise the challenges faced by those whose task it is to preserve digital records for the use and enjoyment of future generations. Emails, URLs and other online data have a short shelf-life and can be deleted, disappear or migrate. The sheer volume of digital traffic means there is danger that much of it will leave no trace in the historical record, unlike old fashioned letters and files.

These and many other issues facing archivists working with space-related records were the centre of scholarly debate at Collecting Space, the inaugural conference of the Science and Technology Archives Group (STAG) held at the Dana Centre, Science Museum in London on 18 November.

STAG was created to celebrate and promote scientific archives and wants to engage ‘with everyone who has an interest in the creation, preservation and use of archives related to science, technology, engineering and related disciples’.

Speakers included archivists from the Science Museum, Imperial College, The British Library, the Royal Astronomical Society and Jodrell Bank (University of Manchester). I was invited to present on the unique Ministry of Defence UFO archive at The National Archives and the open government project that made many of these papers available online.

In her keynote presentation Professor Michele Dougherty of Imperial College described how data from the Cassini-Huygens mission to explore Saturn, its rings and moons has been collected by scientists. Prof Dougherty designed the magnetometer and other instruments attached to the long boom that projected from the Cassini probe. This had to survive extreme temperatures during its 15 year mission that revealed evidence of heat and liquid water in the atmosphere of Saturn’s moon Enceladus. Delegates were pleased to hear that data from Cassini’s final transmission to Earth before it plunged to destruction on Saturn has been kept for future generations of scientists to interpret. 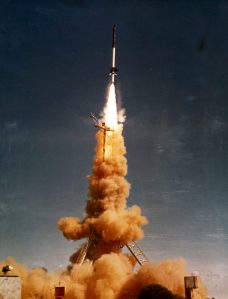 Doug Millard, deputy keeper of the Science Museum, gave a fascinating summary of the British rocketry archive that includes material on the Skylark, the UK’s first space rocket. The collection includes oral history interviews with scientists who worked on the rockets that were tested at Woomera in Australia. The British government cancelled the programme in 1977 on the grounds of its cost.  The Science Museum is also the repository of books and papers donated by the late Sir Patrick Moore (1923-2012), amateur astronomer, author and TV personality who attributed his first break to a BBC programme he presented on flying saucers in 1956.

I was pleased to hear STAG delegates acknowledge the historical significance of many ‘non-official’ records such as Sir Patrick Moore’s meticulous hand-written logbooks. During the lunch break we were invited to examine examples of these and other ‘ephemera’ that include a piece of paper that had travelled to the moon and back with the crew of Apollo 10. Many such items have been lost or destroyed in past because they were not deemed to be worthy of preservation. 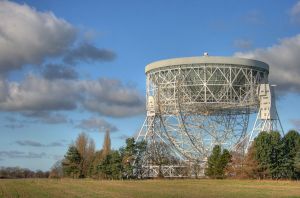 The Lovell telescope at Jodrell Bank in Cheshire (credit: Wikipedia)

During the afternoon Dr James Peters described some of the treasures held in the archive of the Jodrell Bank radio-telescope in Manchester. The large steerable telescope built under the direction of Sir Bernard Lovell (1913-2012) played a little known role in the Cold War. It was the first to detect the launch of the first Earth satellite, Sputnik, by the Soviet Union in October 1957. The Jodrell records, the largest held by the University of Manchester, includes almost 1000 correspondence files. These include letters sent to Sir Bernard by many ordinary people who wished to report observations of Sputnik – that was tracked by Jodrell Bank in 1957 – and, in more recent years, sightings of UFOs. Despite its rich content, Dr Peters revealed the collection receives just two or three visitors each year.

Sian Prosser of the Royal Astronomical Society archives said their oldest records dated from the 14th century. The RAS also hold correspondence, drawings, glass slides and photographs made by many famous people in the history of astronomy. But the most important collections held at Burlington House in London are the personal archives of more than 40 astronomers including the Herschel family.

As the busy day of talks, tours and discussions drew to an end we heard from Dr Tom Lean of The British Library who has been busy interviewing British scientists and engineers about their life in space research. To date some 150 individuals have agreed to talk about the minutiae of their lives and much of this National Life Stories collection is available online.

The conference ended with a talk by Dr Amy Chambers of Newcastle University who is working on the AHRC-funded project ‘Unstettling Scientific Stories’ which uses science fiction to investigate the history of scientific futures. Amy has visited the archives of Sir Arthur C. Clarke and Stanley Kubrik and her main research interest is the Planet of the Apes films.

All in all the first STAG conference was a great success and left me wanting to explore the holdings of these and many other archives and collections of science and space-related materials in the UK and further afield.