During the Cold War the three radome golfballs at RAF Fylingdales on England’s North Sea coast became a sinister symbol of the dreaded ‘four minute warning’.

This was all the time the British government believed we would have from the moment its radars detected the approach of Soviet ballistic missiles before warheads impacted on their targets. 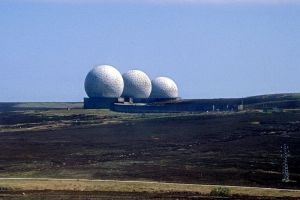 RAF Fylingdales former raydomes, as they appeared in 1986. Alan Denney from London, CC BY 2.0 httpscreativecommons.orglicensesby2.0, via Wikimedia Commons

Today the Soviet Union is just a memory and the golfballs have been replaced by one single powerful phased array radar encased in a three-sided truncated pyramid.

Yet RAF Fylingdales continues its key role in the Ballistic Missile Early Warning System (BMEWS) that links it and sister bases in Alaska and Greenland to the North American Air Defense Command (NORAD) bunker deep beneath Cheyenne Mountain in Colorado.

In the post-9/11 world new threats and the militarisation of space continue to keep Fylingdales on constant alert for threats from afar. Its radars have a range of 3000 miles and are unique in having 360 degree of coverage in azimuth. This would appear to make them a formidable tool for tracking any UFO that enters Earth’s atmosphere.

But as Allen Hynek’s protégé Allan Hendry discovered during research for his UFO Handbook, NORAD has a narrowly defined defence mission. It exists to guard the route across the Arctic Circle that would be used by any future Russian attack and its radars ‘are not located inland, looking skyward; they’re situated along our perimeter looking outward to the horizon’.

Nevertheless, since the Fylingdales began operating in 1965 the UFO grapevine has buzzed with rumours. The most recent was a tabloid story from 1998 that claimed a UFO ‘a big as a battleship’ had been tracked moving at improbable speeds of 17-24,000 mph (27-30,00 km/h) above the North Sea.

Reporting on the story for The Yorkshire Post I was given a tour of the curiously antiquated control room and radar block by the station commander. He said the story was ‘pure fantasy’ because its radars were not configured to track aircraft in Earth’s atmosphere. That was ‘someone else’s job’, he said, referring to the air defence radars that detect Russian aircraft that play a cat-and-mouse game with NATO fighters above the North Atlantic.

In its space tracking role Fylingdales computers ignore any objects that do not behave like a rocket launch or man-made satellite in orbit.  If an ‘uncorrelated target’ is detected, its computers search for matches against directories of known missile or satellite launches.

The Ministry of Defence claim that in its 60 years of operations RAF Fylingdales has never tracked a UFO. But that depends how you define ‘UFO’. In 1979 Hendry was told NORAD record between eight and nine hundred of what they define as ‘uncorrelated targets’ (UTCs) every day.

However exciting this may sound, this total includes millions of pieces of man-made satellite debris along with meteor trails and auroral pulses, all of which generate ‘noise’. He was unable to discover how much of the residue remained ‘unexplained’ and whether any action was taken to investigate these further. But records of such incidents were not kept for long because storage was expensive and the data ‘bear little significance to NORAD’s military mission’. 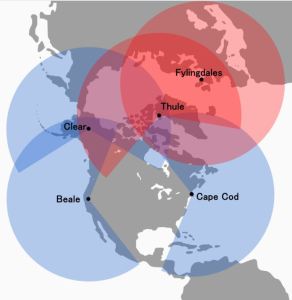 Hendry’s findings help to throw light upon a revelation made by RAF Group Captain David Todd who was the RAF’s contact for the MoD’s UFO desk during the 1990s.

When I interviewed Todd in 2012 he revealed how on one occasion he ordered a secret inquiry into the source of a mystery object that appeared in Earth’s orbit.

This happened in 1981 or 82 when Todd was Senior Duty Officer at the Yorkshire moors base. He returned to Fylingdales as station commander in the late 1990s and was later promoted to HQ Strike Command where he was responsible for reviewing UFO reports on behalf of the RAF, liaising with the UFO desk.

‘Unknowns came up on the radars at regular intervals for all sorts of reasons,’ he told me. ‘At that time if the radar had sufficient capacity spare, it was told to go track them. That was because we are interested in unknowns and sometimes we needed to find out what it is, where it is and most importantly what it might run into during its orbit such as spy satellites.

‘I remember this [incident] particularly clearly. It came up as an unknown and [Fylingdales] radar tracked it. We could not match it up with anything on our computers. And radar tracked it for quite a long time. We had quite a lot of information on it. It appeared to be in Earth’s orbit and we waited for it to come around again but it did not return. So that got us really interested, because people started saying “ooh, is it a UFO?”

The ‘unknown’ did not reappear but Todd decided it could not be ignored so he tasked the defence contractor SERCO, who designed and maintained the radars, to investigate further. ‘We were duty bound to do so, because this was an unknown object,’ he said. ‘They did a hell of a lot of work on it and came up with various theories. One of which was “an unidentified flying object with little green men inside”! Well you have got to be open minded about this stuff, you can’t discount that possibility.’ 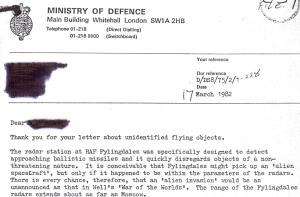 But the ET theory was not taken seriously. ‘We decided the most likely explanation was a meteorite that was rotating in the same direction as the Earth,’ he said. ‘It appeared to be in orbit at the time it was tracked by the radar. I say appeared to be in orbit but it probably wasn’t in orbit. We decided it skimmed past the Earth and either burned up in the atmosphere or went off again into space and that explains why it didn’t come back’.

No official record exists of this remarkable incident as far as I can discover. None of this is the result of an overt cover-up but because, as Todd explained, the investigation was never reported to MoD.

‘It was nothing to do with unidentified flying objects, it wouldn’t fall into that category [e.g. of lights in the sky reported by a member of the public],’ he explained. ‘It fell into the category of something the radar had seen that we could not identify. If we told anyone it would have been HQ Space Command in the USA [Cheyenne Mountain] but no one else would be particularly interested’.

However a letter sent by MOD UFO desk officer Peter Watkins in 1982 to an inquiry from a member of the public who asked about the technical capability of the radar makes for interesting reading (see inset). Watkins said the radar station at RAF Fylingdales was specifically designed to detect approaching ballistic missiles and it quickly disregards objects of a non-threatening nature. But:

“…it is conceivable that Fylingdales might pick up an “alien spacecraft”, but only if it happened to be within the parameters of the radars. There is every chance, therefore, than an “alien invasion” would be as unannounced at that in Well’s War of the Worlds.”