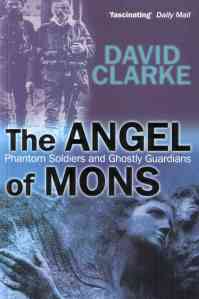 The Angel of Mons: Phantom Soldiers and Ghostly Guardians.

“The officer suddenly came up to us in a state of great anxiety and asked us if we had seen anything startling, he then pointed to the sky, I could see quite clearly in mid-air a strange light and I could distinctly see three shapes, the one in the centre having what looked like outspread wings.”

In 1914, as German troops advanced through Belgium, they met at Mons with the British Expeditionary Force. Ill-prepared and vastly outnumbered, the British troops were forced to retreat, with little hope of saving the lives of those at the Front. It was in these circumstances that many of the wounded and dying soldiers, brought back from the Western Front, reported having been rescued by strange angelic forms in the sky that protected them from massacre.

Since then The Angels of Mons has remained one of the best-known legends of 20th century warfare, but the mystery remains. Did British soldiers really see angels, saints and bowmen leading them against the Germans? Or were the stories the result of hallucinations experienced by battle-wearing men, carefully planted propaganda or simply the misinterpretation of a short story in a London evening newspaper?

Praise for The Angel of Mons:

‘An indispensable digest of original accounts and the routes whereby fiction and hearsay crystallised into myth’ (Fortean Times).

‘A fine book thorough and meticulous, a fascinating exposure of the lines between fact and myth’ (Yorkshire Post).

‘Fascinating reading. His book is a must for folklorists interested in contemporary legends or in twentieth-cenutry concepts of the supernatural.’ (Jacqueline Simpson in Follklore, the journal of The Folklore Society).

‘This detailed investigation leaves no stone unturned, reaching a logical and entirely credible conclusion’ (Ann Clayton, The Journal of the Western Front Association).

‘The great strength of this book is that it shows how a combination of actual events, propaganda, and existing folklore can combine to create a fresh ‘truth’, highly recommended to anyone with an interest in the weirder byways of military history’ (Peter Brookesmith, The Shooter’s Journal).

The Case Of The Elusive Angel Of Mons. By Alan S. Coulson and Michael E Hanlon