Was it really an angel?: a Cold War radar UAP story

It is easy to forget that victory in the Second World War was followed by a long period of dangerous and uneasy peace in Europe. Expenditure on defence delivery systems for nuclear weapons and both overt and covert surveillance activities proceeded almost at wartime levels on both sides of the Iron Curtain.

An important component in this country’s surveillance activity was the maintenance and upgrading of the radar defence screen around the UK which had been such an essential factor in the Battle of Britain and for the rest of the war. In the 1950s, this radar screen was virtually unchanged from its operational status at the end of the war. Large approaching aircraft could be detected at a range of approximately 120 miles beyond our shores. Yet the speed of potential enemy bombers had been increasing through the years since the war and thus the warning time had effectively decreased.

The British government decided to invest money and effort into a significant improvement of the existing radar screen aimed at doubling the detection range on potential enemy bombing aircraft. The Radar Research Establishment (RRE) was asked to design the elements of a new high power defence radar so that a commercial electronics company could develop these concepts into a new radar, make and test a prototype, manufacture a number of production versions and install them at strategic coastal sites around the UK. A large team of scientists, production engineers and technicians was assembled by Decca, the company that secured the contract. I headed that team. The service name for this defence radar was the Type 80. 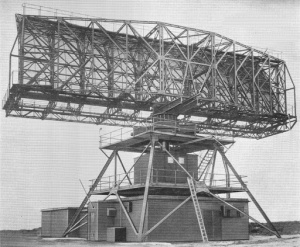 A Type 80 surveillance radar of the type installed at RAF Trimingham, Norfolk, that tracked a UFO moving at Mach 2 in 1953 (credit: ventnorradar.co.uk)

Work started early in 1951 and within one year the first prototype had been designed and installed at RAF Trimingham, on a small site near the coast in north Norfolk. The 75 feet wide by 25 feet high antenna mounted on a large turntable supported by a massive 4-cornered steel gantry revolved at 4 rpm driven by four 50 HP electric motors. The rack-mounted electronics (using vacuum tubes and circuitry on aluminium chassis) was housed in a large 4-sided steel cabin slung underneath the turntable and rotating with the antenna. Two radar displays were housed in a separate hut near the gantry.

In early 1993 I attended, at RAF Buchan near Peterhead in Scotland, the de-commissioning ceremony of the last of many operational versions of the Type 80. This equipment had been in continuous service for 40 years. The switch-off itself was marked by a low-level fly-past of Tornado fighters and had been preceded the evening before by a quite splendid party in the officer’s mess. Towards the end of the evening the tale below was recounted and received in friendly yet polite disbelief.

…One evening in 1953 a RAF sergeant and myself were carrying out some special tests on the radar displays with the main equipment rotating and operating at full power. The moonlit night outside was almost cloudless, the sort known in wartime as “a bomber’s moon”. The sergeant, George, indicated an aircraft target which had appeared in the north on the radar display at a range of 220 miles. We plotted its course travelling south over the North Sea as it approached the Norfolk coast. When it was 10 miles or so away, it turned smartly right and proceeded due west and ultimately disappeared off the screen somewhere over middle England at a range of over 200 miles.

The airborne target at all times gave a very strong radar signal and would have been a large target. It had been detected at almost the extreme range of the radar system so it must have been flying very high. This follows as low flying targets cannot be detected at long range due to the curvature of the earth, unless the radar itself is positioned at a good height such as on a hill or a mountain. This certainly did not apply in Norfolk! 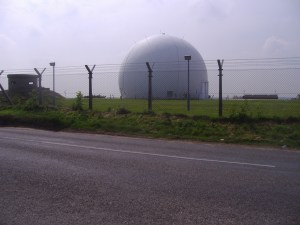 Whilst the target had been moving south over the sea, we measured its speed as Mach 2 and it maintained this speed constantly over the whole of its journey. The world’s airspeed record was obtained in the mid-1950s by the British Fairey Delta 2 at a speed, as I recall, of Mach 2.2 over a fairly short course of a few tens of miles. So what was this airborne object in 1953 which seemed capable of travelling in excess of 420 miles at a speed of Mach 2.0?

After the incident was over we looked at each other in some awe. George thought that the incident had better be entered into the station log. I pointed out to him that nobody would believe us and proposed that we close down for the night and repair to a nearby hostelry where I would buy him a pint and pretend it had never happened.

As far as I know George never told anyone about this incident and nor did I until this night in the RAF Mess. After the incident I had kept alert for a long time to see if anyone else had detected this same target and reported it but there was never a report of any other radar “sighting”. Many years later in the course of business I met a Russian high ranking radar officer and in a discrete manner, told him of our experience and enquired if they had an aircraft in 1953 capable of flying from Russia at that speed. He assured me that such performance did not exist in the USSR at that time and had they possessed such an aircraft would they have been crazy enough to send it on such a mission?

I can hazard no explanation for what had been to George and I an extraordinary event and I do not attempt one now.

Certainly there was not at that time a flying machine devised by man capable of performing in the manner I have described. The British Canberra bomber was at that time the standard NATO aircraft used for radar performance evaluation and whilst capable of a 500 mile flight at 40,000 feet altitude, it could not fly at Mach 1 (as I recall) and was unlikely to have been on such a mission late in the evening.

It is common knowledge in the radar industry that all surveillance radars, from time to time, show on the radar display weak wandering targets. These randomly moving targets are believed to be small discontinuities in the atmosphere such as air turbulence or air pockets. Because their effective target size is small they only appear as short range targets. They are known by radar operators as “angels”. Larger atmospheric effects such as rain or snow produce much bigger radar responses and are familiar to all these days as part of the presentation during weather forecasts on TV.

During the period of the Cold War the USSR was thought of as a godless regime where we regarded ourselves as the “good guys”. In 1953 this particular defence radar equipment existed only as a prototype and was under initial evaluation. Perhaps the Good Lord was on our side and had decided to give us a really good target to test the equipment out? After all angels can be and do anything when under instruction from a higher authority!