On The Couch With Cassie

Alex Cassie, who died aged 95 in April, played a key role in forging documents used in the mass break out from a wartime prison camp immortalised in The Great Escape.

But what is less known – and ignored by his obituaries– was his postwar role as a RAF psychologist advising the Ministry of Defence’s UFO desk. 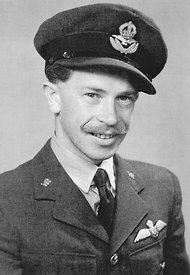 Born in South Africa to Scottish parents in 1916, Cassie graduated with a degree in psychology from Aberdeen University and joined the RAF as a pilot on the outbreak of the Second World War. In 1942 the bomber he was flying was shot down over the Bay of Biscay and he was interned in the notorious Stalag Luft III POW camp for the remainder of the war.

It was here that Flt Lt Cassie was co-opted onto the X-Organisation of captured RAF airmen who were busy digging three escape tunnels code-named ‘Tom, Dick & Harry’. Cassie’s eye for detail was invaluable in helping to produce hundreds of faked identity cards and other essential documents needed by the escape committee. His character was immortalised by actor Donald Pleasance in the 1963 American film The Great Escape.

But on the fateful day of the escape in 1944 Cassie chose to stay behind knowing he was claustrophobic, a decision that troubled him for the rest of his life, according to his obit in The New York Times. Of the 76 airmen who entered the tunnel, most were recaptured and 50 – including all but one of Cassie’s hut mates – were shot on the orders of Hitler.

Post-war Cassie joined the civil service as a psychologist and worked in the Air Ministry developing psychometric tests for rookie aircrew at the RAF’s officer and aircrew selection centre. When Air Ministry was swallowed by the Ministry of Defence in 1964 Cassie joined the staff of the Chief Scientific Advisor (CSA). It was from here that he was co-opted into a special UFO field investigation unit following a flap of sightings in 1967.

In October that year news headlines were dominated by reports of a star-spangled ‘flying cross’ pursued by police officers in Devon at speeds of up to 90 mph [for details of this case and its likely explanation see Ian Ridpath’s page here]. When the officers appeared on TV news MoD was flooded with new reports and pressure from MPs to launch a formal inquiry. When on 30 October Defence Minister Merlyn Rees was asked in the Commons if he could reassure MP that he had received scientific advice on the sightings, he said:

‘We have access to scientists of high repute – they have been consulted on all these matters – and also to psychologists.’

Cassie was the psychologist referred to by Rees and for two years he joined a small committee of MoD experts – dubbed ‘the James Bond department’ by one witness – tasked with field investigations of the more unusual UFO reports received by the military. The team also contained scientist John Dickison from the Defence Intelligence Staff branch DI55 and the UFO desk head, Leslie Ackhurst. Despite recent claims about the existence of a ‘UFO Project’ this was in fact the last time MoD conducted properly resourced investigations of aerial phenomena or quizzed witnesses in the field.

I met and interviewed Alex Cassie in 2001 with Andy Roberts during the research for our book Out of the Shadows, which was published in the following year. Even at the age of 84 his memory of those days was razor-sharp and one pithy comment stood out in my notes:

“I think that the people who report sightings of UFOs are far worthier of research than their actual reports.”

But Cassie was no closed minded skeptic on the possibility that some UFOs could be exotic phenomena. In 1968 he quizzed a retired BOAC technical officer, Angus Brooks, who reported a daytime encounter with a strange translucent flying object at close range on the Dorset Coast. Drawing upon his knowledge of the limitations of aircrew to accurately estimate distance and size, Cassie believed that Brooks’s ‘instant knowledge and certainty of the size and distance of the UFO and its intent are all suggestive of the immediate and inexplicable awareness which are characteristic of many dreams.’ Cassie was convinced the total experience could only be accounted for as a daydream, but he could not resist adding a note to his report which said:

“If his experience can’t be explained in some such way, then maybe he saw an extra-terrestrial object.”

His comment was immediately put-down by DI55 who said they felt the possibility of an ‘E-T-O’ was of a ‘very low order.’ Brooks eventually received a standard letter that said MoD had concluded ‘that you did not see a “craft”, either man-made or from outer space.’

Alex Cassie left his UFO work behind in 1969 when he moved to the Army Personnel Research Establishment at Farnborough. He retired in 1976 as senior principal psychologist and fellow of the Royal Psychological Society.

His last words on UFOs remained open-minded and are similar to my own views:

“As for the psychological aspects [of UFO experiences] it is difficult to generalise. Doubtless there are cases where a report of a UFO sighting owes more to the personal instability of the reporter than to fact but these are probably rare. For most reported sightings we have to accept that the observer is genuinely reporting what he believes he has seen.

“We do know, from those cases where there have been multiple sightings of an identified physical object, that quite sincere witnesses can differ widely in their reports of what they have seen and that there is a tendency to describe characteristics which we know were not present. This is a perfectly natural human trait; most people are not trained objective observers and probably do not think about the description of an unusual object until after they have seen it and then what they report is a function of the stimulus object itself, the quality of their own vision and their own unconscious wish to fit the whole experience into some acceptable conceptual framework.”

2 Responses to On The Couch With Cassie