Spring-heeled Jack, the legendary bogeyman familiar to students of British folklore, has been invoked by news of an extraordinary experience with a road ghost in Surrey.

Scott Martin and his family told the Surrey Comet they were confronted by a ‘dark figure with no features’ that vaulted over a dual carriageway and over a 15ft bank whilst on a taxi ride home late on Tuesday, 14 February.

The experience left Scott, his wife and four-year-old son Sonny shocked whilst the taxi-driver ‘admitted he didn’t want to drive back alone’ along the Ewell bypass near Epsom afterwards. 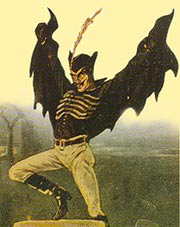 Scary stuff! Mr Martin, 40, who lives in Banstead, told the paper how initially they paid no attention when the figure appeared by the road. But ‘…the next thing he jumped over the centre fencing…and ran across two lanes. On the side of our road is a bank easily 15ft in height and this figure crossed the road, climbed this bank and was gone from sight all in about two seconds.’

Mr Martin described the figure as ‘dark…with no real features, but fast in movement with an ease of hurdling obstacles I’ve never seen. My last image was of him going through the bushes at the top of the bank. I’m not usually one to be freaked…but the cab driver was petrified.’

The Martin’s experience is of course a classic extraordinary experience with a ‘road ghost’ of the phantom jaywalker type. Other examples are the ‘phantom hitch-hiker’ at Blue Bell Hill in Kent and the infamous Stocksbridge by-pass ghost in South Yorkshire, described in see my paper here.  However this part of Surrey is not, as far as I’m aware, associated with a haunting tradition of this type, nor have the police received other reports of ‘unusual incidents or sightings in the area at night’. It will be interesting to see if publication of this report produces a rash of similar phantom jaywalker accounts.

As for Spring-heeled Jack, the newspaper account says ‘the family has since likened the figure to the legendary figure reported to be responsible for a string of attacks in the 1800s and known for his ability to leap great heights.’  After a brief summary of the SHJ legend it adds that the last ‘sighting’ was in Birmingham in 1986!

But as recent research into the Victorian newspaper archives has made clear, there was no one identifiable person called ‘Spring-heeled Jack’. Rather he was a frightening figure, an archetype: ‘part ghost, part bogeyman, part mystery assailant’, whose name and disguise was adopted by a range of human imitators in the century that followed his reign of terror in Victorian London.

As this Surrey story shows, the leaping legend continues to live on in the collective memory 175 years after his name was first uttered….

20 Responses to Return of Spring-heeled Jack?