On landing his plane in Oregon on the afternoon of 24 June 1947 the businessman and private pilot became world famous.

Within hours an enterprising sub-editor coined the phrase ‘flying saucers‘ and within days further reports of further sightings began to pour into newspapers across the world. What psychologist Carl Jung called ‘a modern myth of things seen in the sky’ was born. 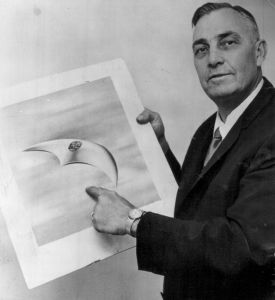 Kenneth Arnold with an artist’s impression showing one of the nine ‘flying saucers’ (credit: Seattle Times)

Many of Jung’s subjects produced artwork depicting UFOs seen in their dreams.

And like many thousands of UFO witnesses before and after 1947,  Arnold felt compelled to draw the mysterious bat-wing shaped objects he saw flying above mountain-tops in the Cascades.

Others have produced photographs, artist’s impressions and even paintings of their extraordinary experiences with UFOs and related phenomena.

To celebrate this year’s anniversary I have curated a collection of original drawings, paintings and photographs, collected by the British Ministry of Defence as the centrepiece of a new illustrated book.

UFO  Drawings from The National Archives will be published by Four Corners Books in October 2017 as part of a new series of histories of British visual culture.

The artwork includes images of an alien craft above the A1, rocket-shaped UFOs over north London and drawings of a spaceship that landed near a primary school in Cheshire.

The 40 images featured in the book have been carefully selected from the British government’s UFO files that form part of the collections at The National Archives (TNA)in Kew.

Since 2008 I have worked with the The National Archives as consultant for the release of more than 200 declassified UFO files, formerly held by the Ministry of Defence. The MoD have collected and sometimes investigated UFO reports since the end of WW2 but their so-called UFO desk was closed in 2009 and its records archived. The press often refer to these as ‘Britain’s real X-Files’.

My book The UFO Files: The Inside Story of Real Life Sightings was published by Bloomsbury in 2012 and provides a history of the MoD’s interest in UFOs.

The most recent MoD files were opened in ten tranches as part of a rolling programme that ended in 2014. All of the files in this project were digitised and are available to download from The National Archives UFO website.

But a similar number of older files, some dating back to WW1, have been opened under the 30 year rule and are available to researchers at Kew.

Possibly the best known file contains Winston Churchill‘s famous memo, sent to to the Air Ministry in 1952, that demanded to know ‘What does all this stuff about flying saucers amount to? What can it mean? What is the truth?‘

A further 15 miscellaneous UFO files were opened in June 2017  and the final three files will join them in the reading rooms later this year.