How UFOs Conquered the World

How UFOs Conquered the World: The History of a Modern Myth, will be published in hardback by Aurum Press on 14 May 2015.

It is the story of the long, strange trip that I began almost forty years ago when I was first gripped by the UFO bug as a child. Partly a personal pilgrimage and mostly a social history it is a nostalgic top-down deconstruction of a subject that never ceases to baffle, infuriate and amuse in equal measure. 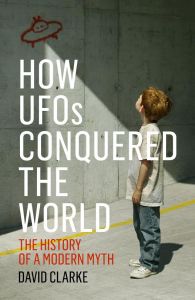 The young lad on the cover is meant to be my ten-year-old self about to set off on a series of strange adventures in the wacky world of ufology.

The hardback edition can be pre-ordered on Amazon here and here is a potted introduction:

The UFO was born in America during the summer of 1947. A lone pilot saw nine mysterious objects that flew ‘like a saucer would if you skipped it across water’ and the media did the rest. Today, almost half the population of the Western world believe we are not alone.  Millions of people claim to have seen a UFO. An alarming number reported being ‘abducted’ by aliens.  And some are convinced there is a conspiracy by governments to hide ‘the truth’.

As a child during the 1970s, David Clarke wanted to believe. He joined a UFO society, went ‘skywatching’, and later, as a journalist, spent decades investigating sighting reports, unearthing Top Secret government files, and interviewing those who claim they have seen interplanetary craft and had met their occupants. He never found a crashed flying saucer, or received a visit from the sinister Men In Black. Instead he discovered something no less astonishing.

This book describes David’s strange journey to the heart of the UFO phenomenon. He has close encounters with abductees, hoaxers and conspiracy theorists. He meets people who think aliens are angels (or demons). And he tracks down the boffins who ran the British government’s now defunct ‘UFO desk’ to find out what their investigations really uncovered. Along the way he reveals how the human will to believe turned the stuff of science fiction into the most enduring myth of modern times.

14 Responses to How UFOs Conquered the World