My latest book opens The National Archives’ own ‘X-files’ to shine a spotlight on many formerly secret official accounts of uncanny phenomena and other unsolved historical mysteries. 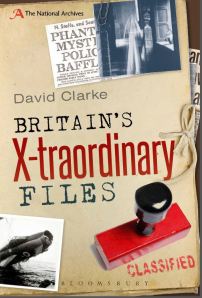 From mediums employed by the police to help with psychic crime-busting to sea monster sightings logged by the Royal Navy, Britain’s X-traordinary Files is the result of 15 years research in the archives at London and elsewhere.

Each section is underpinned by images of key documents created by government agencies that have investigated and sometimes tried to exploit extraordinary phenomena or powers in recent history.

Following the style of its companion volume The UFO Files (now in its second edition) the seven chapters throw new light on rumours, legends and persistent mysteries. Some of the subjects covered by the book include:

Britain’s X-traordinary Files is published by Bloomsbury on 25 September 2014 and can be ordered here and here.

I will launch the book with an illustrated lecture on the Angels of Mons and other legends of the First World War at Sheffield’s Off The Shelf literary festival on 27 October.

On 13 October I joined three other authors a discussion about ghost stories and other paranormal phenomena for BBC Radio 4’s Start The Week. The panel included Val McDermid, the author of Forensics: The Anatomy of Crime, Susan Hill, the author of The Woman In Black and Printer’s Devil Court and Alex Werner who is curator of the Sherlock Holmes exhibition at the Museum of London. A podcast of the show can be downloaded here.

‘...it’s a Fortean must-read; a well-researched and entertaining insight into the wackier side of British officialdom.’

‘…this is a feast of a book, valuable above all for folklore studies but also for parapsychology, history and hard science; and the more important for having grounded itself in the most prosaic of sources, the official records of the nation.’

‘In this entertaining and absorbing book, David Clarke excavates hidden marvels from the depths of The National Archives, casting new light on our uncanny world – from death rays to ghost ships and angels.’