The End of the UFO Files

The tenth and final collection of British UFO files have been released by The National Archives.

From 2008 more than four million visitors from 160 countries have visited the project website to download files that would normally have been hidden away for 30 years.

And since I became spokesman and consultant for The National Archives UFO project it has been estimated that news about the files has reached a worldwide audience of 25 million people.

From June 2013 virtually all the surviving UFO files held by the British Ministry of Defence are in the public domain – in total 209 files and approximately 52,000 pages have been opened.

You can read my visitor’s guide to the highlights of the 10th tranche here and my guest blog on the project website here.  The TNA UFO page also contains my background briefing and a video-cast that provides a summary of the contents.

My book The UFO Files (now in 2nd edition) provides a comprehensive history of the MoD’s involvement in the UFO controversy, stretching back to the phantom airship scares of the early 20th century. It  can be ordered here.

The 10th tranche of papers cover the period from 2007 until November 2009 when the MoD closed down its UFO desk and UFO hotline.

Stories about those who ran ‘Britain’s X-Files’ were loved by the tabloids but resented by defence officials, some of whom appeared to believe their involvement in the subject was a waste of scarce resources and an invitation for sensational headlines.

But the arrival of the Freedom of Information Act in 2005 increased the pressure for full disclosure of their files and the decision to transfer their archive to The National Archives, made in 2007, was the first step towards ‘making UFOs history’ in Britain.

Signing off its closure, Gordon Brown’s government were told that in nearly 60 years not a single ‘sighting’ had ‘revealed anything to suggest an extra-terrestrial presence or military threat to the UK’, even when reported by ‘more reliable sources’ such as police or pilots.

Ministers were told the very existence of a ‘UFO desk’ and a ‘UFO Hotline’ encouraged people to report experiences that were of ‘no defence value’.

With every department of government under pressure to slash spending, the closure of Britain’s X-Files was inevitable.

And ironically, it seems the enduring public obsession with UFOs gave MoD the excuse they needed to draw an end to their 60 year involvement in what had become a huge public relations headache.

The newly-released files reveal how sighting reports had trebled, from 208 in 2008 to 643 in 2009, overwhelming the lone desk officer responsible for UFOs. Was this craze for seeing flying saucers the result of an ‘alien invasion’ as the tabloids suggested?

Or was it because public awareness of UFOs and ET life had risen as a result of the mass publicity surrounding the release of the files themselves?

And there was another factor to take into account. As the accounts recorded in the files make clear, the vast majority of the sightings reported in 2008-9 described groups of floating orange globes in the night sky.

Floating Sky Lanterns were the source of many ‘sightings’ recorded in the MoD’s files from 2003 (credit: Guardian.co.uk]

The fact that some of these ‘sightings’ were reported by helicopter pilots, soldiers and police officers underlines how even so-called ‘credible witnesses’ can be mistaken about things they have seen in the sky.

During the silly seasons of 2008-9 The Sun newspaper in particular worked up the popular desire for UFO yarns to dizzy heights.

First in order of silliness was the January 2009 Sun headline that claimed a UFO had collided with a wind-turbine on the Lincolnshire Wolds, tearing off one of the blades. Examination by Ecotricity later revealed nothing more exciting than metal fatigue as the cause of the damage.

The wind-turbine yarn followed a page one splash in June 2008 that revealed how a soldier from the 1st Royal Irish Regiment captured an ‘alien fleet’ on his mobile phone as they floated over his barracks in Shropshire. 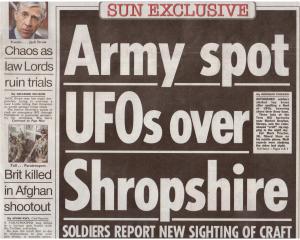 The MoD files reveal the Army’s press office went ballistic when they saw his footage of 13 flying objects splashed across page one of the best-selling tabloid.  The soldier was threatened with disciplinary action by his superiors who feared that ‘…it will be revealed as a fake and the soldiers/battalion will look stupid’.

And sure enough, soon after The Sun splash, it emerged that guests attending a wedding party at a hotel near the soldier’s barracks had released Chinese lanterns the same night the ‘alien invasion fleet’ chose to appear.

The British Army’s press office said the leak was made worse by the fact the paper reported on the latest death in Afghanistan as a small sidebar alongside the UFO story; ‘…the comment from broadcasters was along the lines of “the services cannot fight two wars but it seems there are soldiers who have time to go UFO spotting.”’

In this case the military hoped the story would ‘die quickly’. It’s clear that by closing the UFO desk and transferring their files to the archives, the MoD are hoping to draw a line under their involvement in this subject and follow the lead taken by the US Air Force which closed its UFO investigations in 1969.

UFOs really are now history, as far as the British authorities are concerned.

For a more detailed summary of the contents of this tranche of files read my National Archives UFOs #10 page here.

All 25 files can be downloaded free of charge for one month from The National Archives UFO page here.

To mark the end of the UFO file release programme an iPhone/iPad app called UFO Files UK has been launched by a company called Black Plaques working with The National Archives. This innovative app allows users to explore data from 5,ooo sighting reports from across the British Isles, dating back 25 years, that have been harvested from the MoD’s UFO files.

The app is available to purchase from the iTunes store from Friday 21.

9 Responses to The End of the UFO Files