The Centre for Contemporary Legend is working with Sensoria Festival to celebrate the Sheffield region’s ancient links with Robin of Loxley, otherwise known as the folk hero Robin Hood. 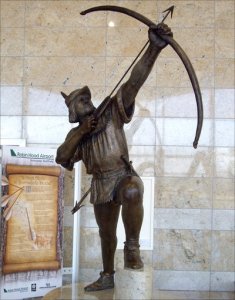 Hallamshire – the old name for Sheffield adopted by the university –  is one of the places identified in the medieval legends as Robin’s birthplace. But despite a strong oral tradition in Loxley that can be traced back 500 years the modern city currently has no permanent marker or facilities for those who wish to visit key locations associated with the outlaw.

Sensoria’s theme for 2019-20 is Myths and Legends and this year’s festival kicked off in August with an outdoor screening of what is still considered to be the definitive depiction of the legend on film.

The Adventures of Robin Hood (1938) stars Errol Flynn in all his Lincoln green technicolour glory and Olivia de Havilland as Maid Marian. The film calls the outlaw Robin of Loxley and it was fittingly shown to a gathering of local folk in Storrs Wood at Loxley, reputedly the outlaw’s original stomping ground.

The screening was followed by the launch of a locations-based Robin Hood app that is narrated by Reader in Journalism Dr David Clarke. Folklorist Dr Clarke has also contributed a chapter to Sensoria’s illustrated booklet on the folk hero’s South Yorkshire links, published in November.

This entry was posted in Uncategorized. Bookmark the permalink.