Cases of UFOs observed simultaneously from the ground and corroborated by radar are rare. But one UK incident in 1996 set Whitehall alarm bells ringing and led to a full investigation by the Royal Air Force (RAF). Formerly secret files, released to DAVID CLARKE under the Freedom of Information Act, reveal how officials were literally stumped by this case.

This radar/visual incident occurred in October 1996 at the height of an outbreak of UFO sightings in East Anglia. The sightings began in the early hours of 5 October with a report by police patrols at Skegness, Lincolnshire. A report faxed to the RAF from Yarmouth coastguard shortly after 2 AM said:

“[Police] can see a strange red and green rotating light in the sky southeast from Skegness. Looks to be high in the sky directly over The Wash. Many people here are observing it…looks strange as it’s stationary. No [aircraft] sound in the area…”

Alerted by the commotion, police in nearby Boston were on alert and soon they too saw a bright light in the sky in a southeasterly direction.

The coastguard alerted the RAF’s air rescue centre at Kinloss in Scotland who had no record of any aircraft distress calls. They asked the air defence radars at RAF Neatishead, on the Norfolk Broads, for help in identifying the lights.  Neatishead produces a 24-hour “real time” display of what is known as “the UK Air Defence Region” (UKADR)  constructed from data supplied electronically from a patchwork of overlapping military and air traffic radars.

One of these is the air traffic control radar at Claxby, near Market Rasen in Lincolnshire. Shortly after the UFO alert began, a controller at Neatishead noticed an unidentified “blip” on the Claxby radar. Seen from Neatishead this target appeared to be stationary over Boston in Lincolnshire where some of the visual sightings were then occurring. Although it was not possible to work out the height of the target, they knew it was not an aircraft because it wasn’t emitting a transponder signal.

The apparent confirmation of the visual sightings with a unidentified radar target was sufficient to spark off another UFO flap. Soon afterwards the airfield radar at RAF Waddington, Lincolnshire, detected another unidentified blip in a different position. Controllers asked the crews of three civil airliners that passed through the area to keep a lookout. None reported seeing any other airborne object.

As the hours passed it quickly became apparent the UFOs on radar were not all they originally seemed to be. The blips did not move for nine hours and were still visible on radar as dawn broke. Early that morning experienced staff decided the blip seen by Claxby’s was actually “a permanent echo” created by tall buildings that often appear on radar screens. The market town of Boston had an excellent contender: the 273ft spire of St Botolph’s church, which can be seen for miles across the flat fenland landscape and is known locally as “The Boston Stump.” 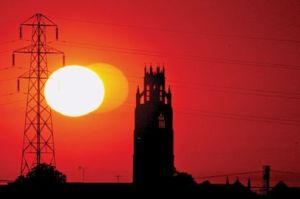 This type of echo would normally have been ignored. It became significant on this occasion only because sightings of UFOs were being reported to the RAF,  which naturally led staff to check radar for confirmation.

As experience has shown, few UFO mysteries can be fully resolved even when key elements – such as radar trackings – can be adequately explained. In this case during the UFO flap coastguards put out a call to shipping in the North Sea and received a response from a tanker, the MV Conocast, that was taking fuel to dredgers in The Wash. Alerted from the shore, the crew of four reported seeing two separate sets of unexplained lights from 2 am until daybreak when they faded in the dawn. One group appeared to be above the horizon to the south and may have been the same phenomena seen by the police in Skegness. Another group were visible in completely the opposite direction, high above the North Sea. These were stationary, flashing red, blue, green and white.

While the RAF were satisfied they had discovered the source of the radar UFO, they remained puzzled by the source of the lights seen by police and the tanker crew. They suspected some rare natural phenomenon or even a lightning storm at sea could have caused the lights, but a far more likely explanation was provided by the police themselves. One of the Skegness patrolmen said he watched the twinkling light periodically for a period of two hours until “…the star …was fairly high in the sky looking very similar to the rest.” Just before daybreak PC Dave Leyland used his camcorder to film the UFO from the roof of the force control room. His five minutes of footage depicts a single, stationary white light above a block of flats.

By daybreak the panic was over. PC Leyland and his colleagues decided their UFO was a star or a planet, an identification that was later confirmed by astronomers at the Royal Greenwich Observatory. In their report to the RAF, the observatory said that Venus, the source of many previous UFO reports, had been shining with exceptional brilliance in the early morning sky to the east, probably explained the light on the video. Astronomer Ian Ridpath identified the other colourful flashing object seen from Skegness earlier as the brightest star in the sky, Sirius, low on the horizon to the southeast. Another bright star, Vega, explained the lights seen in the opposite direction by the tanker crew. He explained that impression of rotating colours as a well known optical phenomenon resulting from light from stars distorted by the atmosphere.

These mundane explanations came far too late to kill the excitement the UFO flap had generated. News that the UFO sightings, made by credible witnesses, had been “confirmed by RAF radars” spread quickly through the local media. The transcript of the conversation between the coastguard, police and RAF was published and the headlines read: ‘MYSTERY LIGHTS: WERE THEY UFOs?’; ‘OUT OF THIS WORLD’ and ‘UFOs EXPOSE 9-5 DEFENCE DANGER’.

These headlines were seen by a Labour MP, the late Martin Redmond, prompting him to write furious letter to Defence Minister Michael Portillo:

“What strikes me as incredible is that no aircraft were scrambled when an uncorrelated target was picked up so close to the [UK] coast…The RAF are supposed, or so I believed, to be responsible for keeping a watchful eye on activity in the UK air defence region but seem to have no idea as to what is going on.”

Stung by the criticism, the RAF ordered a full investigation that occupied a senior Air Defence officer full time for eight working days. He took the unusual of step of interviewing key witnesses for his 23 page report, completed in November 1996. This concluded the RAF’s low key reaction was fully justified. Although not all the light phenomena could be fully explained “research has not revealed evidence that alarming or extraordinary events were being witnessed” and there was no justification to order the scramble of RAF assets to intercept any UFOs.

The idea that Boston Stump, the planet Venus and assorted stars could have been responsible for the UFO scare was dismissed as absurd by many who saw these explanations as further evidence of a cover-up.

One East Anglian resident, in a letter to his local newspaper, drew parallels between the Boston Stump and the Orfordness lighthouse which had been used to explain the sightings in RAF Woodbridge 15 years earlier. He wrote:

“It seems that ‘The Stump’ is not on dry land after all. In fact, it is situated somewhere in the North Sea, or The Wash, or the North Norfolk coast, or at Yarmouth, or even floating in the sky miraculously above the A47 in Norfolk.”