NASA’s preparations to test a saucer-shaped spacecraft have placed the iconic ‘flying saucer‘ back into the popular consciousness.

In a BBC Magazine feature journalist Jon Kelly explores how the saucer ‘has served as visual shorthand for the gleaming, jet-propelled, post-war vision of the future’.

Saucers are of course familiar to everyone from ’50s sci-fi classics such as The Day the Earth Stood Still but also turn up in architecture, such as the prefabricated Futuro houses designed by Matti Suuronen.

The saucer-shape appears in toys, kettles, phones, sherbet-filled sweets and even a number of English pubs.

One such hostelry, in Gillingham, Kent, was re-named following a ‘flap’ of UFO sightings nearby in 1954.

I enjoyed a pint of best bitter inside this Flying Saucer during a trip to interview Derek Dempster, the former Spitfire pilot and UFO watcher, a decade ago. 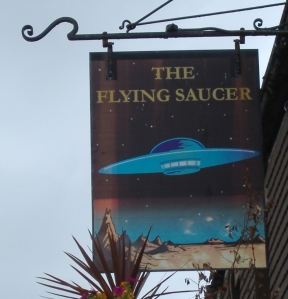 NASA’s plans return us full circle to the optimistic post-war era sandwiched between the UFO flaps of 1947 and 1967.

And some forward-thinking engineers such as Britain’s John Frost tried to turn these ideas into reality.

But Frost’s design for a futuristic prototype flying saucer for Avro-Canada (‘Project Y2′) – based on German designs from WW2 – never made it past the drawing board.

And despite many subsequent attempts to revive the idea – such as the British Railways Board patent for a fusion-power saucer in the ’70s – saucers have remained firmly in the eye of the beholder.

1 Response to Saucery in Pop Culture