One of the most enduring mysteries of the Cold War – the disappearance of US pilot William Schaffner in a secret RAF exercise above the North Sea – has finally been laid to rest.

Wreckage of Captain Schaffner’s lightning, as it was lifted from the seabed off Flamborough in 1970 (Credit: The National Archives DEFE 71/95)

Captain Scaffner was just 28 years old when his RAF Lightning – call-sign Foxtrot 94 – crashed into the sea off Flamborough Head in Yorkshire one stormy night in September 1970.

Now his youngest son Michael has told the full tragic story of his father’s death in an exclusive interview with Ian Black for the monthly magazine FlyPast (July).

Michael Schaffner and his brothers were given access to classified RAF files on the loss of Lightning XS894 after they read internet rumours that claimed the USAF exchange pilot died in a secret operation to intercept UFOs.

The rumours began when RAF crash investigators lifted the wreckage of the Lightning from the seabed – only to find the cockpit was empty.

The body of the dad-of-three from Ohio – who had flown combat missions in Vietnam before his posting to RAF Binbrook, in Lincolnshire – was never found.

But endemic Cold War secrecy meant his young wife and family were never given access to the full contents of the RAF Board of Inquiry held into his death in 1972. 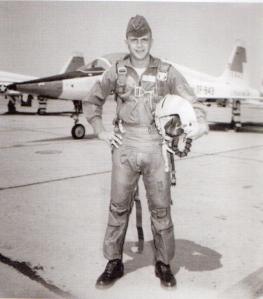 A young Captain Schaffner during flight training in the US (Credit: FlyPast/Michael Schaffner)

Two decades later a newspaper in Grimsby, where the wreckage was first brought to shore, published claims by an anonymous ‘whistleblower’ who said he was a member of the crash investigation team.

The source, who has never been identified, claimed Schaffner’s Lightning had been scrambled to intercept a UFO tracked by NATO radars.

But the RAF inquiry file – opened at The National Archives at Kew in 2008 -reveals the ‘bogey’ seen on radar was actually a Avro Shackleton.

Its crew had been diverted by RAF controllers in a cunning plan to simulate a defecting Soviet aircraft that intended to land in the UK.

‘Tacevals’ (tactical evaluation exercises) were conducted in strict secrecy. Their aim was to test the interception skills of fighter pilots who were kept on 24-hour alert duty.

Lightnings from RAF Binbrook and other airbases on the British coast were frequently scrambled to deal with incursions by Soviet aircraft during this tense period of the Cold War.

Transcripts of Foxtrot 94′s last call to RAF ground controller appear in the Board of Inquiry file. They contained no reference to UFOs,  just the last desperate transmissions from Schaffner as he tried to intercept the slow-moving Shackleton.

The Lightning disappeared from radar as it turned at low altitude in the darkness above a stormy sea, ‘a mission beyond his experience’, according to his son.

A fuller account of how the mystery unravelled can be followed in my Case Files here. The story was originally investigated by the BBC regional programme Inside Out North who helped Schaffner’s sons discover the truth.

But during the ’90s the story of Captain Schaffner’s alleged ‘abduction’ by aliens spread across the internet. In 1999 it featured in a book, Alien Investigator, by a retired Yorkshire police sergeant, Tony Dodd, who was convinced the MoD had covered up the truth.

This was the time when the The X-Files and the 50th anniversary of the Roswell incident brought government cover-ups into the public spotlight.

In his FlyPast article, Michael Schaffner tells of his shock when he stumbled across the sensational claims whilst searching online in 2000.

‘Reading the internet that day, I was left pretty rattled…never in my wildest dreams did I think that someone would take the time to fabricate a story worth of The X-Files out of my father’s crash…’

His article reveals the full details of his father’s final moments and lays to rest the mystery of what happened to his body. He says:

‘We will probably never know the full truth of what really happened but it certainly wasn’t any of the bizarre stories of the internet sites. A chain of events beyond his control led to his death. No one person could be held to blame.’

Foxtrot 94 by Ian Black and Michael Schaffner is a part of a feature ‘Spotlight on the English Electric Lightning’, published in the July issue of FlyPast magazine.